skip to main | skip to sidebar

Hey, Universe, where are the science adventure stories for girls? And while you're at it, please give well-meaning strangers a different line to use with the kiddo than, "Why aren't you in school?"
Posted by Sue Solberg at 10:02 PM No comments:

The garden in August 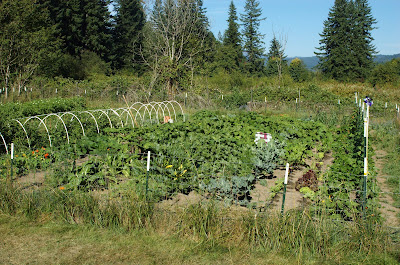 Hm. Looks more like a jungle than a garden. It will be interesting to see how the squashes do next year, when they'll have this size area all to themselves. I'm told one vining squash can happily take over 25 square meters. We don't have that much space for them, but they'll have more than they've got just now.

Otherwise...tomatoes are finally starting to think about getting ripe, some of them. The Spawn ate the first ripe cherry tomato from one of our container grown tomatoes, but I'm looking forward to the big 'uns out there in the garden. Peppers are maybe thinking about turning colour too. A couple of 'em actually look kind of sad--may have gotten some sort of mold, I suppose. We grow that really well.

The herbs are...puttering along. The basil isn't doing too badly, but the dill is just barely doing anything. There are a couple of decent sized tobacco plants though. Just planted some coriander and parsley for fall harvest. Yum! I also just planted some kale in the herb row, since that's where there was space. Or rather, where there was space not being taken over by squashes!

Next row, green onions are finally harvestable. The Spawn has decided they're like giant chives and she's been pulling them and eating the tops. The Better Half gets the bottom part. They both seem reasonably happy with that arrangement. Beets are doing well. I planted to give us a steady supply (I hope) until it gets too cold. Seems to be working so far. The cauliflower and cabbages are nice and leafy, but otherwise not doing much.

Chard is good. Lots and lots of the stuff. I tried two new to me varieties this year, Perpetual Spinach, which all bolted and Verde di Taglio, which is also now bolting. I think I'll stick with Bright Lights, which makes leaves as big as my body and never bolts. And for spinach, phooey on Galilee, which has bolted as soon as it get four leaves every single time I've planted it, spring, summer and autumn. Bordeaux did a bit better, but it bolted pretty quickly. Olympia is good though. It gets some respectable growth before bolting. The purslane is doing very well, as is the vegetable mallow. I planted a bunch of leaf amaranth, which should be ready to start harvesting soon. Pretty stuff and tasty too.

Should start getting some cucumbers soon. The zucchini is going into summer overdrive, which means I need to start dehydrating. And, of course, the other cucurbits are enthusiastic, as I said. I'm seeing some decent sized stuff in amongst the leaves already, so starting them indoors may actually give us truly ripe squashes this year! Keeping my fingers crossed.

We've just started harvesting from the broccoli. So very, very tasty! I need to work on getting a good succession of broccoli next year. But I do hope to be able to freeze at least a bit this year for winter eating. Or we might just eat it all. Even the Spawn likes it!

Um...more greens, right. Spinach and chard. This is the...third and second round respectively, so just starting to harvest and eat them. Harvest and freeze, in the case of much of the chard. I suspect I'm going to get tired of frozen chard and beet greens.

Bush beans are doing fairly well. They're meant to all be for dry beans, but the Better Half was impatient for green beans and forgot. The corn has just started silking. It looks so small, doesn't it? It's a dwarf variety and never does get any bigger. Still makes sweet corn though, which is all that really matters to the corn enthusiasts of the household. 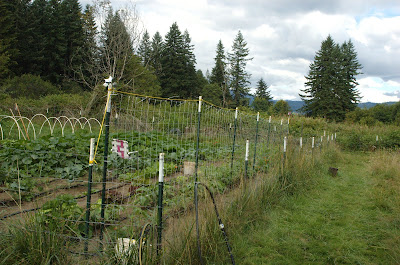 The pole beans are nicely strung up on nylon netting. We've gotten a few of the Scarlet Emperor runner beans already, but the others are either just starting to bloom or not even thinking about it yet. Laggards! Oh, the picture is just illustrative of the netting. It's from a couple of weeks ago and doesn't reflect the current state of bean growth.

Posted by Sue Solberg at 7:53 PM No comments:

The joys of illness

Last week the Spawn got sick. She spent a whole day doing basically nothing, though I had the opportunity to read aloud for hours and hours and hours. She's still got the snot, but has otherwise recovered.

Maybe because she'd just been sick, she was most sympathetic about my go at the virus. She advised me to get lots of rest. She said that because she liked looking at pictures when she was sick, she would paint pictures for me to look at. She painted several like the one below of our garden. She also gave me a small cardboard tube which she'd painted silver. I guess I know what to give her next time she's sick.... 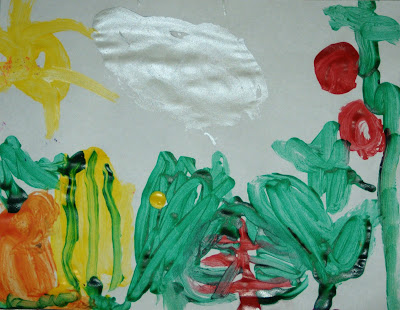 From left to right, that's a pumpkin, a delicata squash, the squash leaf, a chard leaf, the leaves of a beet, and a tomato plant.

The garden in July 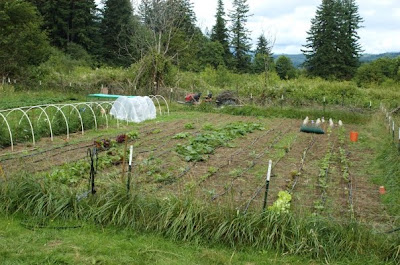 The Garden in June 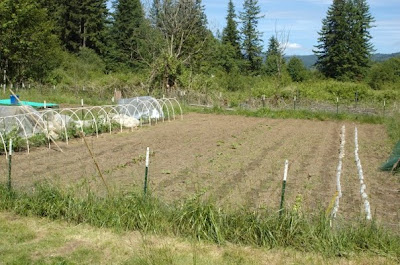 This is the summer/fall garden area--the winter/spring area is...a mess. I decided to skip most of the winter garden for this upcoming winter so the potatoes and some of the beans are planted there. About half the garden is hoed in this shot, but luckily most of the weeds are small enough to not show too much at this resolution. Actually some aren't weeds but volunteers. A ton of borage, most of which is getting chopped, strawberry spinach, purslane, some vegetable mallow, and, oddly enough tomatoes. I didn't think anything got ripe enough last year to volunteer. From left to right: First row is tomatoes and peppers, which will be under the cloches until they won't fit any more. We need all the help we can get to harvest any in this climate. Next row is Diana's row--nothing much visible there. Next is herbs, most of which just got moved outside. I'll direct seed a few more things, but wanted a head start on basil, etc. Next row has green onions and, just visible I think, beets. There some cabbage down at the far end, but it's still tiny, tiny. Next row is carrots and I need to plant another round in a few more days. Still pretty small, but doing well. Next row is greens--visible is a bunch of chard, which we love and it freezes well. Then an empty row. Then two rows of cucurbits--cucumbers, watermelon (a girl can dream, can't she?), zucchini, and lots and lots of winter squash. We like squash and it stores well, if the voles don't get to it. Then another empty row, though I've got a couple of rounds of radishes there. They'll get harvested before the space is taken over by squashes. Then broccoli, I think. A whole row, interplanted with flowers. Another thing we like that freezes well. Then more greens. Then summer lettuces--yay for salads! Last two rows are beans, one bush beans for dry beans and one runner and pole beans, some for green and some for drying. The plastic cups with holes punched in them are to keep the bluejays off until the plants get large enough to be less attractive to birds. I was an idiot and didn't do that for the corn, which I am now restarting indoors. Grr. It'll go in a block in the far right corner.
Posted by Sue Solberg at 8:13 PM No comments:

Okay, not really from the fridge, nor yet from the hallway gallery. The Spawn drew these today and decided they should be in HER room. For which I can't really blame her in the least. I think they're pretty cool. Not sure I'd have had the patience to do all those pine needles when I was five. 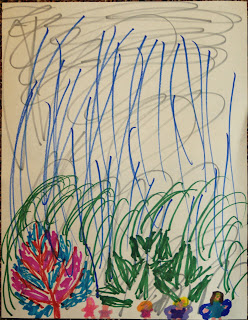 This is several fairies with ivy leaf houses under a pine tree. She used a stencil for the ivy leaves, which is think is wonderful. That's why we have a big box of stencils. 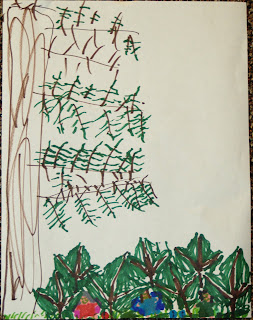 In this picture it's raining. There are several fairies in the tall grass, which hides them from predators. Unfortunately, two of the fairies have had their wings bitten off! I suspect this last explanation of being after the fact when she realized she'd forgotten their wings. But maybe not. We've lost a couple of ducklings to predators lately, even though our grass is MUCH taller than what she's drawn here.

Posted by Sue Solberg at 9:49 PM No comments:

Ye gods, but I am turning into quite the seed hoarder! I do try to keep track of stuff so we plant everything that's about to expire, but I've still got five boxes of seeds in the fridge. Luckily it's the spare fridge and meant to be used for seeds, potatoes, the occasional batch of meat aging before going in the pot (or the freezer). If it was the main fridge, we'd have no room for food. Hmmm...I see we have a hundred and seventy some odd different varieties of potential yumminess. This may take a while.

Of random interest and so I can find my links easily, we have seeds from:

Adaptive Seeds (way too much interesting and unusual stuff)
Baker Creek (great heirloom seeds, if not necessarily the best for this region)
Botanical Interests (primarily flowers and herbs from them)
Fedco Seeds (not local, but decent stuff and excellent prices--their seed potatoes are pretty decent too and certified)
Fertile Valley Seeds (not much, but all good seed)
Horizon Herbs (fantastic medicinals)
Johnny's Selected Seeds (aimed toward the commercial grower, but good seeds and fantastic germination information on the packets)
Kitazawa Seed Company (Asian veggies, mainly)
Nichols Garden Nursery (lots of good heirlooms and OP seeds)
Sand Hill Preservation Center (more heirlooms and a good source for cover crop seed and sweet potato slips)
Seeds of Change (based out of NM, but had some stuff I needed at the time--they seem to be owned by Mars, Inc. now)
Siskiyou Seeds (fairly local, not a huge selection but all excellent for this region)
Territorial Seed Company (the biggest really local seed company--decent seed, but not my favourite any more for no particularly good reason)
Tomato Growers Supply (mostly solanums and I'm not happy with their seeds, not going to buy from them again, no matter how tempting the varieties)
Uprising Seeds (more local, organic, heirloom stuff)

Yikes! Maybe I should go plant some of those seeds now. Gonna start another round of super-early-season tomatoes (all less than 70 days) and maybe some more lettuce. Those a two things you can never have enough of. Maybe I'll go plant some more bee food too. The plan is to plant a pound of bee feed seed in patches all around the place. Should be pretty and useful at the same time. Some of 'em are even culinary/medicinal too!
Posted by Sue Solberg at 2:41 PM No comments: